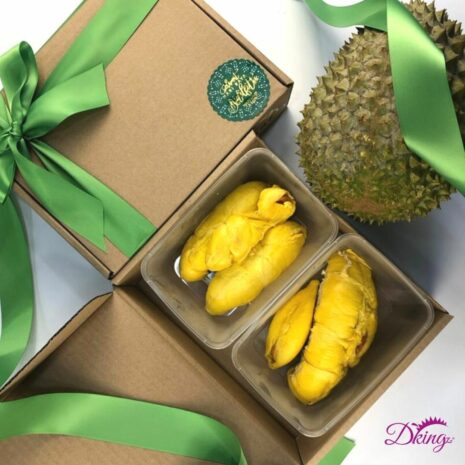 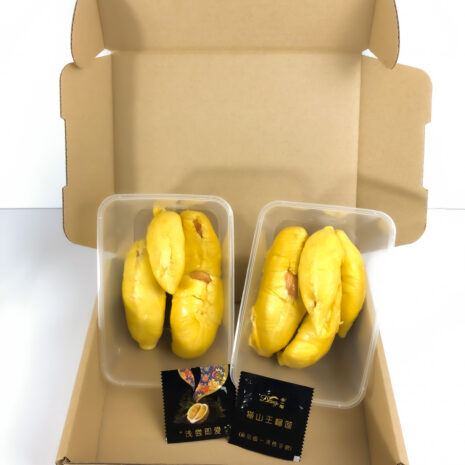 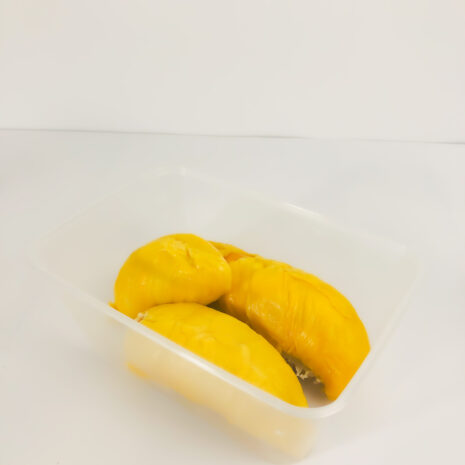 Free Delivery for 5 box and above (Klang Valley Only)

RM15 Shipping Discount for 5 box and above (West Malaysia Only)

Musang King durians are medium to large fruits, averaging 2 to 4 kilograms, and generally have an oval to slightly lopsided shape with a long stem. The surface is covered in large, pyramidal spikes that are wide and spaced apart, and the spikes range in variegated hues of yellow, brown, tan, to green. Musang King durians also have visible, vertical seams connecting a flat crown surrounding the stem to a distinct five-point, brown star on the bottom of the fruit. The spikes typically point away from the seams, and the star, seams, and angular spikes are distinguishing features of the variety as Musang King is often counterfeited. Underneath the surface, the husk can be cut and torn open to reveal a white, spongy interior, encasing multiple thick lobes of flesh in chambers. Each bright yellow lobe has a wrinkled appearance with a semi-firm skin, containing a soft, creamy, dense, and smooth, paste-like consistency. Within the flesh, there are also narrow and flat, small red-brown seeds. Musang King durians have a sulfuric-sweet scent, considered less pungent than other durian varieties, and a rich, candy-sweet flavor with hints of ginger, tropical fruits, and garlic.

Musang King durians, botanically classified as Durio ziberthinus, are a famous Malaysian variety belonging to the Malvaceae family. The sweet, subtly bitter fruits were developed in the 20th century and are highly favored for their unusual, golden yellow flesh and creamy, silky consistency. Musang King durians are also known as D197, Rajah Kunyit, and Mao Shan Wang in China and are one of the top exported varieties worldwide. In 1993, the Malaysian Ministry of Agriculture began documenting durian cultivars throughout the country and deemed 13 varieties suitable for commercial cultivation, including Musang King durians. Despite the ministry’s official approval, many commercial durian varieties were only sold domestically and were unable to compete with Thailand’s booming durian export market. In 2010, Musang King durians were purchased by a few wealthy Chinese businessmen and were heavily promoted throughout China, sparking widespread demand for the yellow-fleshed fruits. Musang King quickly became the dominant cultivar in Malaysia, and in the modern-day, the fruits are exported in mass quantities to China. Musang King is also one of the most expensive varieties due to its limited availability and increasing demand. Musang King durians are favored for fresh consumption and are also commonly incorporated into commercial baked goods, candies, and desserts.

Musang King durians are available during the southwest monsoon season in Malaysia, with a peak harvest from June through August. It is important to note that the availability and season will annually change depending on the weather.

Musang King durians are an excellent source of vitamin C, an antioxidant that strengthens the immune system, boosts collagen production, and reduces inflammation. The fruits are also a good source of potassium to balance fluid levels within the body, magnesium to regulate blood pressure, fiber to stimulate the digestive tract, manganese to assist with protein digestion, and contain lower amounts of phosphorus, iron, copper, and zinc. 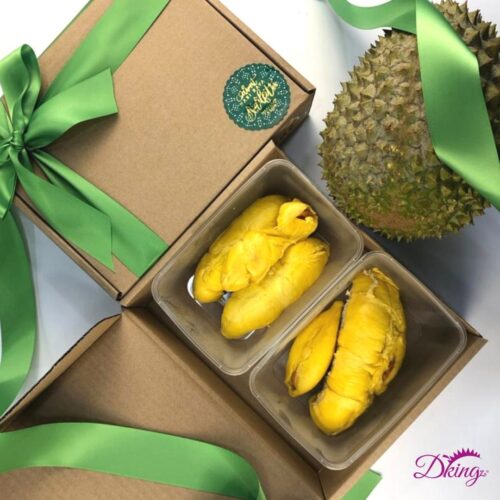